#MasturbationMonday ~ The Code of the West

Featuring Mr Jordan, trail boss from The Ways of the West continuing in the standalone sequel The Code of the West

Straddling her, he lowered his lips to hers, devouring her hungrily, but before she was sated, he moved his body lower, kissing her throat, her shoulder, trailing kisses all the way down the middle of her body. His hands encircled her breasts, squeezing them gently, as he kissed lightly between them, moving his lips further down her body, kissing away the remaining droplets of water from the stream. He circled his tongue around her navel, tickling her, teasing her.
Her breasts were tight in his hands, tight and hot, as though they would burst. The dull ache between her legs intensified, pulsing in rhythm with the rapid beat of her heart. Her breaths were 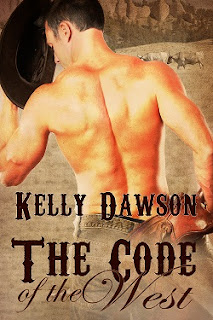 coming in short, shallow gasps as he pressed her back against the towel. What was he doing to her?

He moved his lips down between her legs, nudging her thighs apart with his chin, nipping her upper thighs lightly when she didn’t respond quickly enough. Little squeaks of pleasure escaped her lips and her whole body shivered in anticipation. Still holding her left breast, his other hand trailed down her body to join his mouth at her pussy, and he inserted one finger, probing gently. She gasped, arching her back to meet him.

He lowered his mouth to her pussy, the stubble on his jaw scratching her lightly, she shivered again as he licked away her wetness. He flicked his tongue over her clit, probing deeply within her mound. She couldn’t breathe, she couldn’t think, she could only feel …

Blurb:
In the years since the tragic death of her parents, Jedda-Lyn Cross has given everything she has to keep the family ranch running. She has grown accustomed to getting no help at all from her alcoholic brother, but when his violent, sadistic friend tries to make Jedda his wife against her will, it is the last straw.
Her attacker is the son of the richest family in town, and with the corrupt sheriff ready to do his bidding Jedda is desperate to leave town in a hurry. With no money and no horse, her best chance of making her escape comes in the form of a soon-to-be-departing cattle drive led by the famous trail boss Wes Jordan. But a young woman has little hope of gaining employment on a cattle drive, so drastic measures will be required…

Wes is none too pleased when he discovers that the new drover he hired is actually a beautiful twenty-two-year-old woman disguised as a boy, but after hearing Jedda’s story he promises to protect her. As he quickly realizes, however, that will be easier said than done. Jedda is sassy, headstrong, and in serious need of a good, hard, bare-bottom spanking, and when her reckless disregard for her own safety finally pushes him too far, Wes takes her firmly in hand.

After a painful, humiliating punishment from the handsome trail boss, Jedda is left with her bottom burning and her mind set awhirl. In spite of everything, she aches for Wes to take her in his arms, and when at last he does the pleasure of his skillful, passionate lovemaking nearly takes her breath away. But with her obsessed former suitor and his hired guns still after her, can she bring herself to accept the fact that, for a man like Wes, risking his life to protect the woman he loves is just part of what it means to live by the code of the west.

Email ThisBlogThis!Share to TwitterShare to FacebookShare to Pinterest
Labels: The Code of the West, trail drive, western